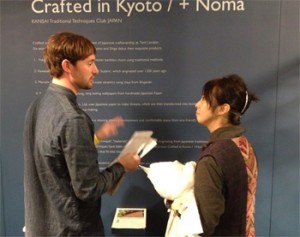 The business has its origins in the 1930s with the hand-pressing of aluminum leaf, which was used to make gold and silver thread for use in Nishijin weaving. Around 1942 production was stopped due to the war, and in 1962 my grandfather incorporated the business as a corporation, and introduced machinery and employed local workers to cut and twist film for the manufacture and sale of gold and silver thread. In 1986 we started fine cutting Japanese paper (machine formed Japanese paper) and since then have primarily performed micro slitting (making rolls of thin cut threads) for the apparel and interior items industries. We also cut other non-woven fabrics, synthetic leathers, and films to widths of 1 to 20mm.
Around two years ago we began creating a fabric out of Japanese paper thread and creating and selling completed products such as jackets, blouses, and coats.
In 2013 we participated in a London exhibition (Tent London) along with five other companies representing traditional industries from Shiga and Kyoto Prefectures, and we were able to show Japanese paper thread and fabric to European attendees.
As a result we entered into a transaction with a Danish company, among others. Japanese paper thread, which is a natural material, received an enthusiastic response, and we think there will be an interesting future in store for the natural material of Japanese paper.
Its strength is comparable to cotton thread so it has broad applications from interior items to apparel.
In the future we plan to start an original brand, creating a material that other companies will not be able to imitate starting from the thread, and will take a two-pronged approach for sales, with the manufacturing business at the core.

Using our company’s thin cutting expertise, we cut modern machine-made Japanese paper, which was developed from the 1000 year history of Japanese papermaking, to create paper thread to be woven into fabrics. In the same way, by weaving people together to create new products, we wish to create new relationships to make never before seen products and send them all over Japan and the world.